The family of a Staten Island teen who suffers from cerebral palsy as a result of a premature birth won a $100 million lawsuit yesterday against the hospital where she was born, attorneys in the case said.

Amanda was OK. But Stephanie, as a result of her premature birth, suffered a brain injury resulting in cerebral palsy, Sgarlato said.

“I watch my twin sister go out with her friends to parties and stuff. I don’t get to do as much as the average teenager,” Stephanie said. “The award will help me do whatever I want to do in life and give me a little more freedom.”

“Stephanie’s life is a pretty lonely one. She doesn’t have a lot of friends,” said her father, Rob Debes, 53, a retired UPS employee. 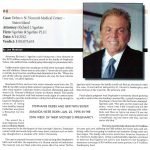